The falls of the same name:

Today was the day we were going to see Victoria Falls, or just “the falls” as everyone calls it. Talking about Victoria Falls can get confusing – there is the town of Victoria Falls, and there are many hotels that start in the same way, like ‘Victoria Falls Safari Lodge’, ‘Victoria Falls Hotel’, etc. But the first stop for everyone should be the waterfalls themselves – the reason that all the other names exist. Victoria Falls is 2 times higher and 1.5 times wider than Niagara Falls. It’s 1.7 km wide – just longer than a mile – and over 100 metres high. 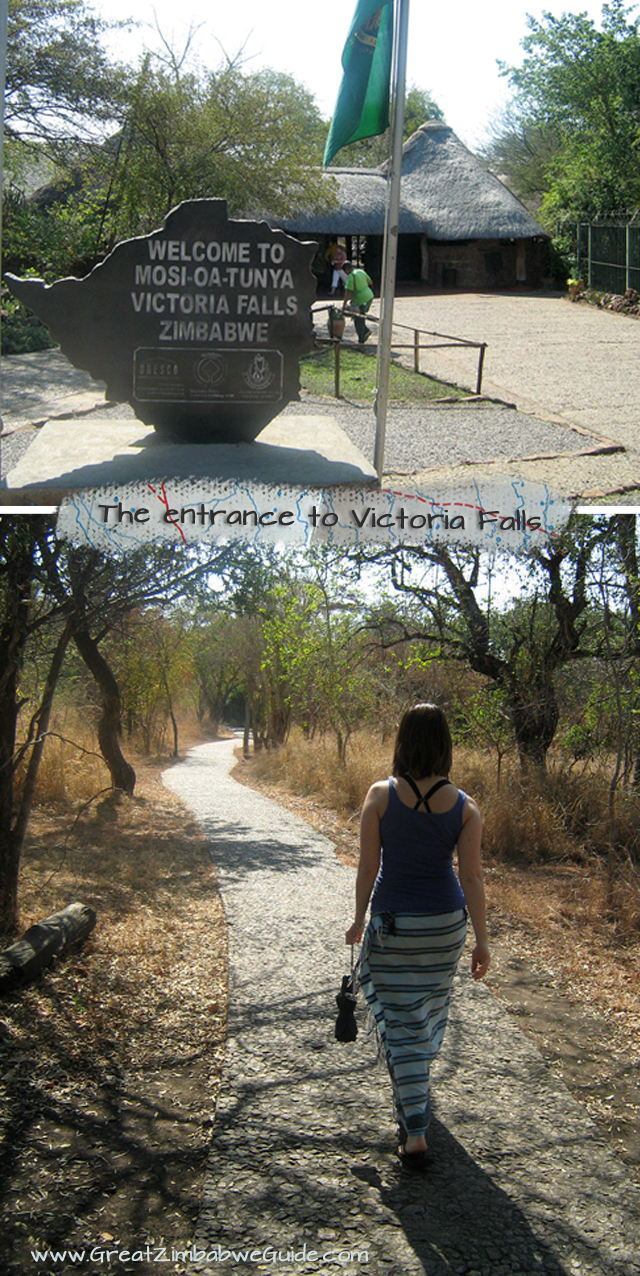 We arrived at the entrance to the falls and parked in the car park next to a group of vendors selling wooden carvings, beaded bowls, and, most pressingly, raincoats. Ben bargained them down a bit and bought a raincoat for him and one for my mum. I had brought a small umbrella with me, as well as a change of clothes – there’s no way I was going to wear a raincoat. How often can you say you got soaked from the waters of the Zambezi river falling from the sky? Other people were more prepared and had brought more civilised-looking rain jackets. We wore slops (flip flops) – because they would be easier to get dry than bulky walking shoes. This was the end of the ‘high water’ season after all, and April/May are known for the splendour of the spray.

After the small ticket desk, there was an information area with posters about how the falls were created, the history of the area’s people, as well as colonial input. Past that was an unassuming pathway into the bush. The colour of the trees and plants changed to lush green in a matter of metres, and then we were met with a bigger-than-life sight. Devil’s Cataract.  A fine drizzle fell on us as we looked at the majestic falls. The sheer drop, added to the enormous power and speed of hundreds of tons of water, meant that there would be no hope for anyone who fell over the edge. It was the sound that was perhaps the most imposing: a deep menacing roar that never stopped.

We walked to David Livingstone’s statue at viewing point #1 and took the obligatory photos with this first European to see the falls. We then turned towards the bulk of the falls, past Devil’s Cataract and towards the Main Falls. I was surprised at how big the islands in the middle of the river were, making the waterfalls look so separate. This made me realise how wide the Zambezi river is. We kept walking and the falls just kept on coming! From about viewing point #9, all we could see was whiteness because there was so much spray. Through this, the sound of the thundering roar continued, reminding us of the power of the water below. The spray was so heavy here that it felt like we were in a tropical rainstorm – and I loved it. 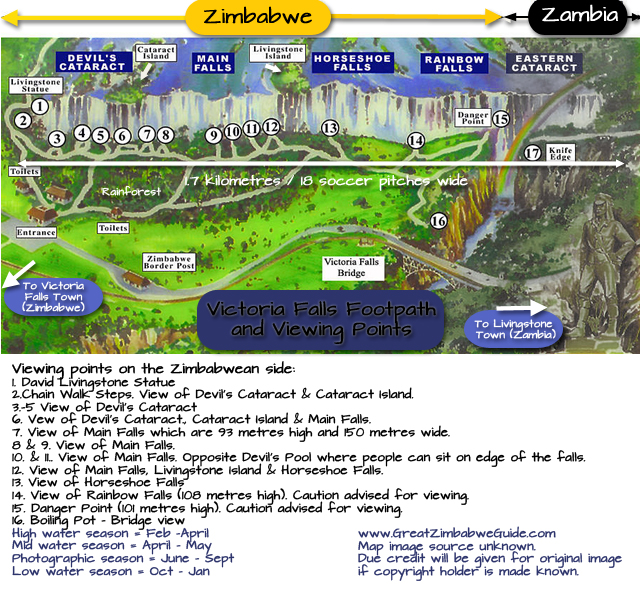 I enjoyed the rainforest around the falls too – lush ferns, trees and moss surrounded the path, making me think we were in a South American jungle. As we walked between the viewing points, this little pathway in the rainforest heightened the feeling of other-worldliness.

The town of Victoria Falls seemed an entire galaxy away. ANY town felt like a universe away. We didn’t go to viewing points #13 and 14 because of the sheer amount of water, and our lack of walking shoes – it was slippery underfoot at those points. At the last viewing point on the Zimbabwean side, #16, we were greeted with the sight of the bridge that went over the Zambezi river, joining the lands of Zimbabwe and Zambia. A rainbow glowed beneath it. The wide expanse of water that we had just seen was now funelled into a gorge about a tenth of the river’s previous width.The waterfall was now a series of rapids. Excuse some of the photos – they were taken from inside a Ziplock sandwich bag! 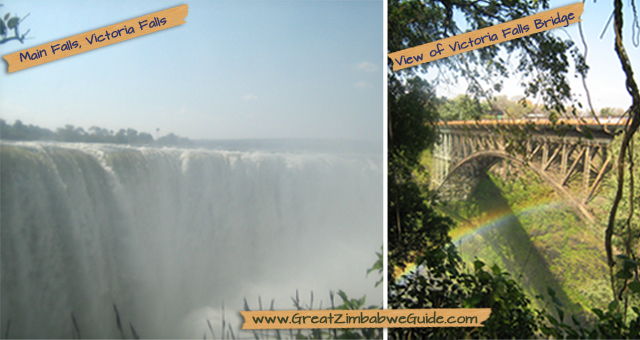 From the bridge viewing point, we could see people getting ready to do a bungee jump off the bridge. My stomach turned into a knot. Ever since we had started planning our visit to Victoria Falls we knew we would do at least one of the ‘activities’ on offer – ranging from walks with lions to bungee jumping. Any activity involving heights make me nervous. As we stood looking at the bridge, I decided that never in a million years would I do a bungee jump. I thought I might be able to pluck up the courage to do the gorge swing– the river was much narrower here. If the ‘swing’ went the same distance as the bridge, the whole thing would be over in under 5 minutes and a vehicle could quickly drive me back to the Zimbabwean side. (I was later to be proved wrong!)

We walked out of the rainforest which abruptly changed back to the scrubland that characterises the rest of Victoria Falls area. The transition happened so quickly – suddenly things looked like Zimbabwe again!

Victoria Falls didn’t disappoint. It was life-affirming being so close to something so powerful, something so much bigger than man. Even the fences and pathways are made out of natural materials like stone and wood – there weren’t any luminous metal barriers or ‘danger’ signs plastered on every tree. This is exactly how I want to see this wonder of the natural world – without technology marring the view. 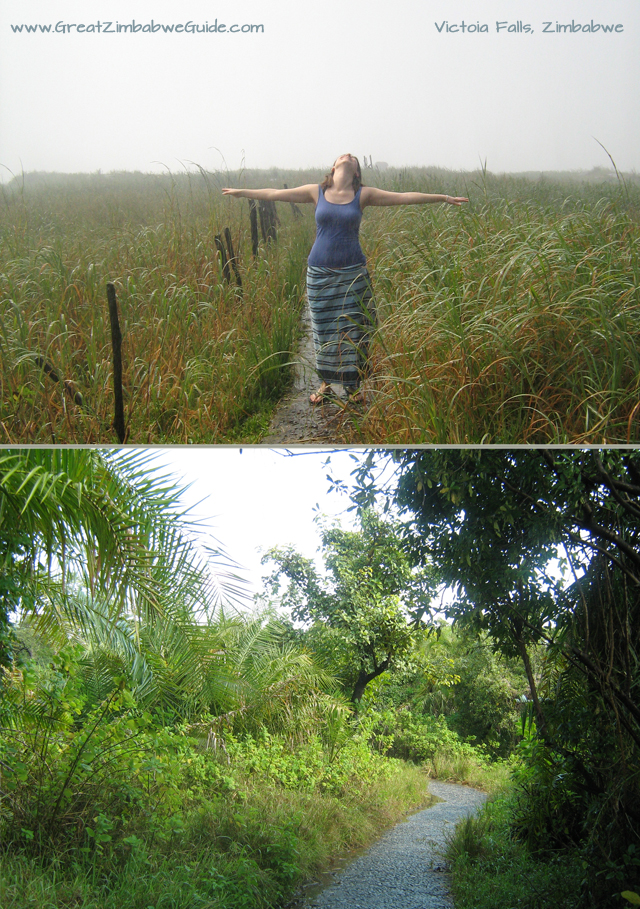 by sheltering under an umbrella or raincoat?”

That afternoon we visited some of the hotels in Victoria Falls Town. I was struck by how each lodge had its own personality. I do think that the way Zimbabwe can make itself different from other African countries (in terms of tourism) is to hold on to its individuality – and I think a lot of this comes from the personality of the people in the industry, from tourguides to receptionists.

One thing remained constant throughout the town and that was the sound of helicopters above our heads. I think it would be amazing to see the falls from above, to really get a perspective of how big it is, but there needs to be tighter restriction on the amount of hours that helicopters operate. It feels very weird being surrounded by raw African bush but hearing the buzzing of engines above.

First up was Elephant Hills Resort, a little further out of town than Victoria Falls Safari Lodge. A conference had taken place there a few days before our visit, according to a big banner across the entrance. The hotel is very imposing – it burnt down a few years ago and they’ve rebuilt a large part of it.

The entrance is enormous. Not by city standards, but by Victoria Falls and general wilderness standards – you don’t expect such a big complex in surroundings that are inherently simple. It was all marble floors and granite columns, gleaming and sparkling in the sunlight. Not my cup of tea for a bush hotel, but, yes, it was impressive. The view of the spray of the falls can be seen from one side of the building, and the view of the Zambezi river from the other, which is stunning, despite the fact that it’s seen from behind a glass wall rather than a balcony. If you want an al-fresco view, the gardens and the golf course feel far more natural and exciting. We didn’t get a chance to walk around these much, but I like the idea of impala leaping in front of me while I reach for my 9-iron (not that I play golf, but you know what I mean). 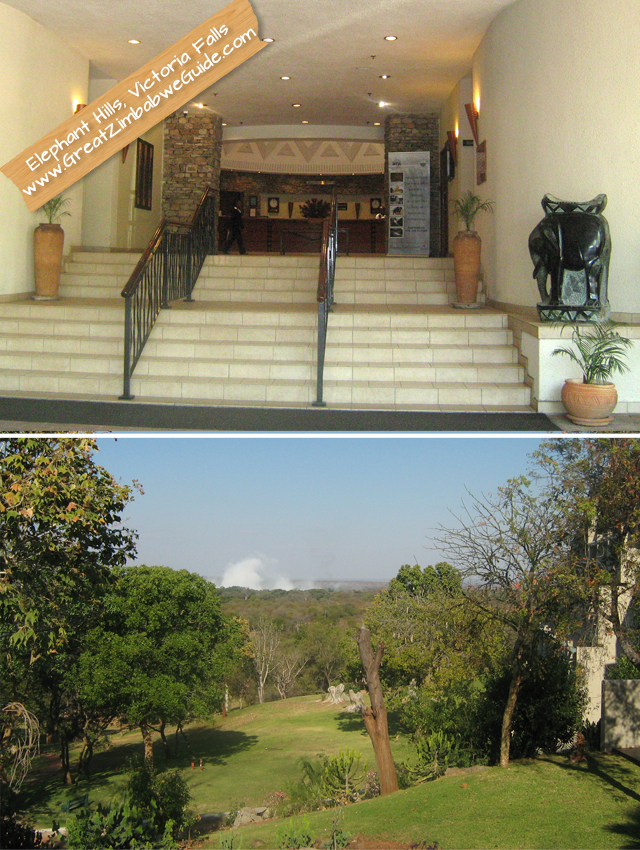 Next was The Kingdom Hotel. This is in the middle of Victoria Falls Town, near the shops and the walkway to the falls. It’s another imposing hotel that has an entrance fit for a king. Elephant Hills seemed to be a place of classical opulence, whereas The Kingdom goes for African luxury. It’s said to be designed in the style of the ancient Kingdom of Munhumutapa. Elephant tusks adorn the domed rooves, giant statues stand at the entrance; there is a casino, spa and 4 swimming pools.

We each bought $10 worth of credits for the slot machines, and said we would play until we ran out of money or made it big, whichever came first. There is a big slot machine area at The Kingdom, and we were there in the afternoon (when most people were out), so we had the pick of the machines. The slots are all electronic so we used swipe cards rather than tokens, and when we won there was a vague clicking sound rather than the exciting sound of coins falling into the tray. I started off losing half of my money, and then found a machine that seemed to like me – I came away with just under $30 – almost tripling my money. Needless to say the next round of drinks were on me. 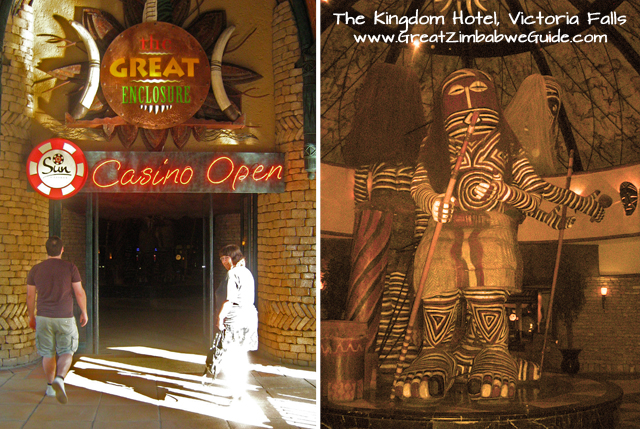 Just down the road from the Kingdom, also near the middle of the town, is Victoria Falls Hotel, which oozes colonial glamour. There’s a pianist in the main dining area, and a large verandah where you can enjoy a drink, light lunch, or high tea. My favourite view of the falls is from the terrace of this hotel. It has an awe-inspiring outlook facing the Zambezi river, the bridge, and the spray of the falls in the sky. This was one of the first hotels built after Europeans first heard about the waterfall, and it has a private walkway where the English visitors would be carried to the falls in a trolley after enjoying a spot of high tea.

We had a cocktail, and sat there, drinking in the peaceful afternoon sun. We caught a glimpse of bungee-jumpers and gorge- swingers from the safe, happy distance of the hotel. I walked to the edge of the garden, watching the gorge swing to try and gauge whether I’d have enough courage to do it. We spoke to an American woman who had done the gorge swing that day, and she was completely calm about it – a piece of cake, she said! When I’d ask if it was safe, she nonchanlantly reassured me, as if I’d asked if it were safe to tie my shoelaces. She also said that two very large people had done the drop just before her, which is a testimony to the strength of the cable. Talking to her, I decided I would do it. And, as my mum said, I was here, wasn’t I?

That evening we went to The Boma, one of Victoria Falls must-see restaurants. Read about our experience in the next post. 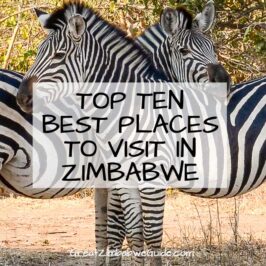 Here’s our list of ten best places to visit in Zimbabwe. Do you know what... 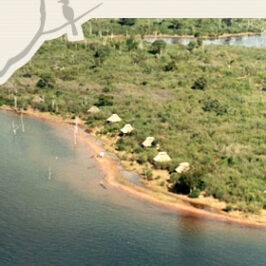 A first-time visitor recounts his first impressions of Zimbabwe, where he visited Harare and Lake... 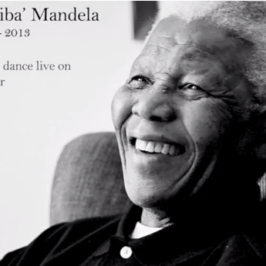 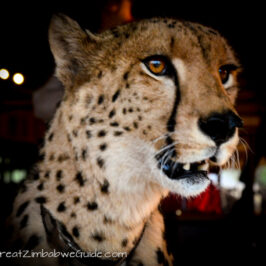 I got to meet a very special resident of the Wild Horizons Sanctuary: Sylvester the Cheetah.... 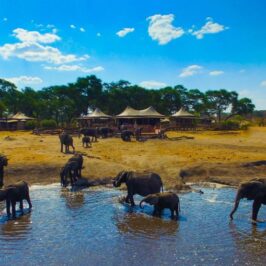