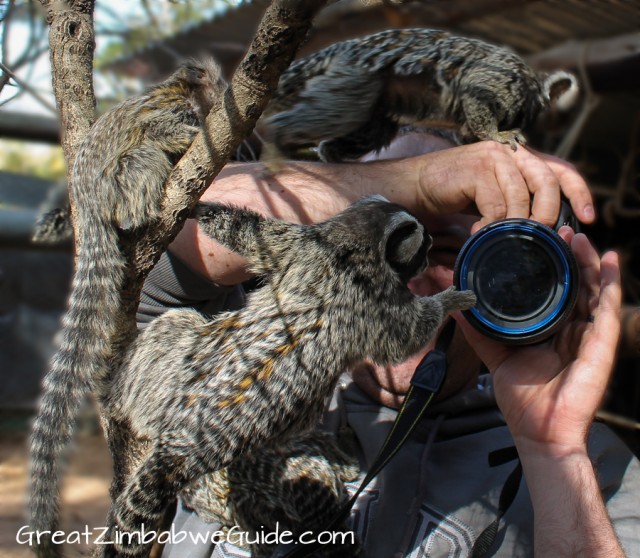 Note: I was not paid for writing this article. I visited this establishment independently and anonymously.

One of the highlights of our time in Harare was Bally Vaughan Animal Sanctuary. (Update: Many of the orphaned animals in this post now live at Twala Trust.) Bally Vaughan is a rescue centre for animals that have been orphaned, abused or injured. They have a huge variety of inhabitants (over 300!), ranging from once-neglected donkeys to a lion with a hole in his heart. This is a great place to visit in Harare for an introduction to Zimbabwe’s wildlife – use the opportunity to get close to the animals and learn about them before you go on safari. (And perhaps get a healthy sense of fear and respect for when you see them in their own turf!)

If someone reports a trapped or injured animal, Bally Vaughan will try to give the animal any necessary medication and then release it into a safe area of the wild. They believe that animals belong in their natural habitats, with their families. Unfortunately, many rescued animals were ones that had been raised in captivity and simply don’t have the skills to survive on their own – it’s these animals that call the sanctuary their home. Some of the wild animals have been rescued from being sold illegally as as pets. Some of them were abandoned after their owners fled the country in the early 2000s. All the animals in the sanctuary have been saved from a place where they would’ve otherwise died or been ill-treated, so the place doesn’t have the same atmosphere of sadness that characterizes some Western zoos.

The sanctuary is used to educate Zimbabwe’s children and visitors about wildlife, and to try cover the cost of their rescue work. I remember visiting the sanctuary as a child and seeing a lion up-close for the first time – it was terrifying but exciting! Returning as an adult stirred up similar feelings, but this time I was also filled with a sense of respect for the carers who work so unselfishly, with so few resources, to give a better life to these creatures.

The entry fee for Bally Vaughan is extremely affordable, to encourage more people to visit and learn about the animals. Many of the more domestic animals are allowed to freely roam about the sanctuary, which gives the place a laid-back, natural feel. This isn’t an upmarket tourist trap built for human enjoyment – rather, everything is run with the animals’ welfare foremost in mind. There are simple, well-kept facilities, including an open-air restaurant/tea room which has a lovely view of a small dam. Sitting under a tree in the tea area can be especially atmospheric at 4pm when all the lions are roaring and the hyenas whooping for their supper!

Do take advantage of the opportunity to go on a guided tour of the sanctuary, as this offers the chance of more interaction with the animals, as well as a chance to hear the stories of how each animal arrived at the sanctuary. Our guide had a visible love for the animals (especially Kylie the hyena) and told us interesting facts about their natural habits as we walked around. These personal touches, mixed with informative facts and humorous anecdotes really made our visit a special one. Here are some of my favourite animals at Bally Vaughan …

Please note: The animals at Bally Vaughan were rescued from traumatic situations caused by humans who tried to raise them as pets, abused them or neglected them. The animals are not kept in captivity or bred for the purpose of human interaction. Bally Vaughan is a ZNSPCA-accredited facility. 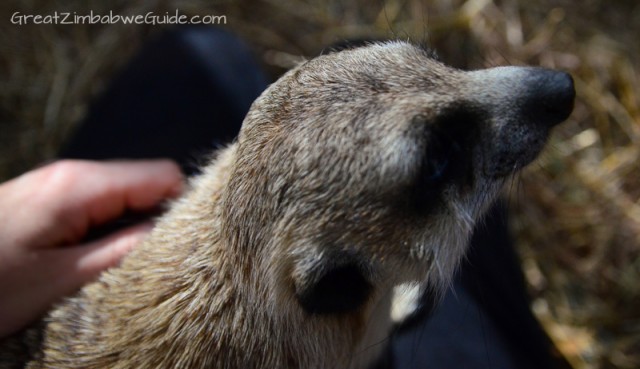 Meredith the meerkat was rescued from a home in Harare. Meerkats usually live in large families, and they are sociable, intelligent animals. As Meredith has no meerkat-family to fulfill her need for companionship, she loves human contact, and she let us tickle and play with her. Her best buddy is a ginger cat called Rafael, who is her surrogate brother.

As you can tell, I made firm friends with Meredith! 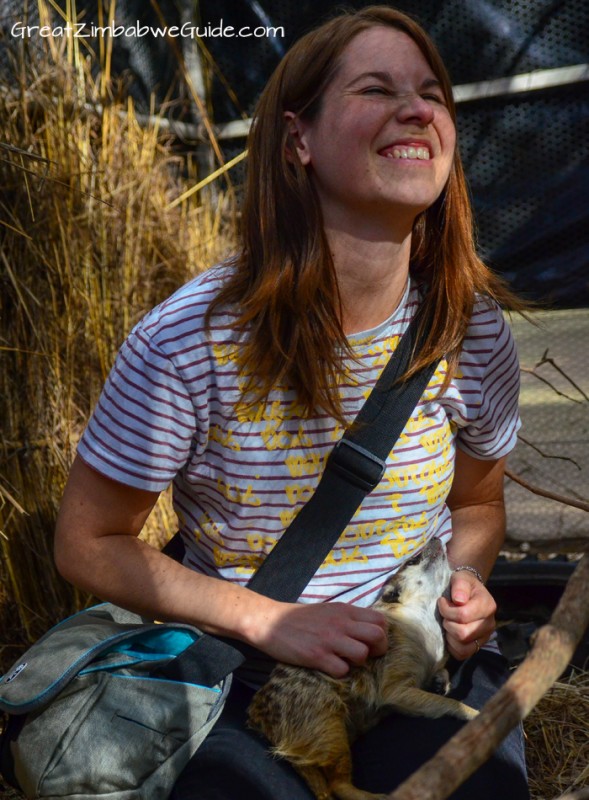 These cotton-eared marmosets were rescued from the workshops at Honeydew Farm in 2009. They loved expensive perfume and would wrap themselves all over the ladies’ necks to make themselves smell as nice as we did.

They were also fascinated by cameras and loved looking at their reflections in the lens. This added an extra level of complexity to our photography efforts!

Kylie doesn’t know she’s a hyena, or that she has jaws that can crush our bones like breadsticks. She does, however, know that she likes being tickled. Warning: do not try this with any other hyenas! 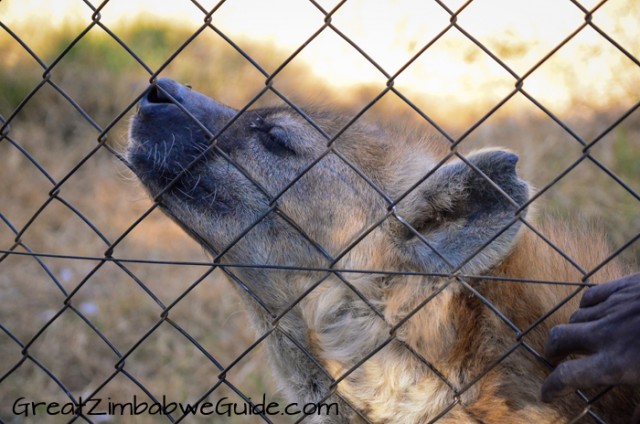 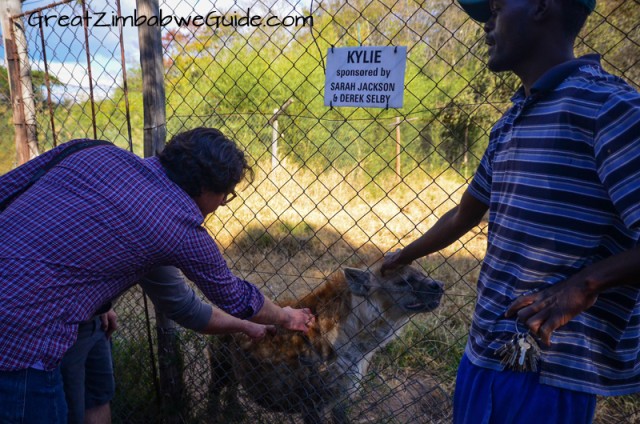 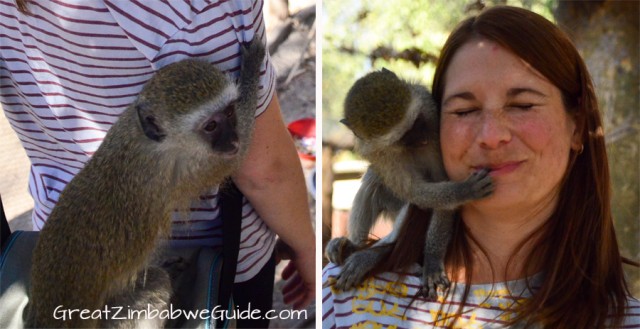 This baby monkey was very curious. He wanted to know what was in our bags, in our hair – he even wanted to check to see if there was anything interesting in my mouth! He loved using our arms and heads as springboards to jump onto nearby branches. 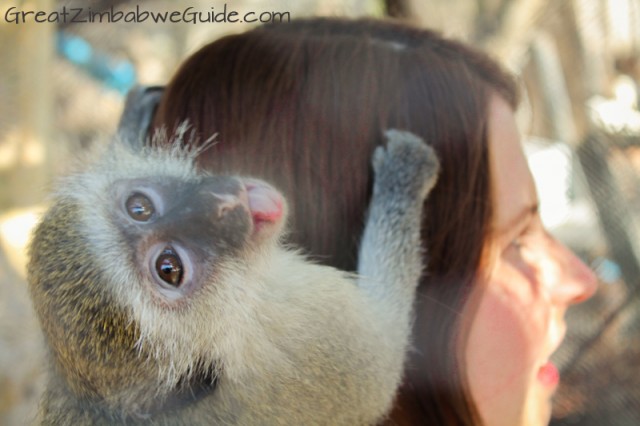 King of the beasts

This lion is called Wire, after he was found with a wire snare round his neck in 2011. The scars remain around his thoat to this day, and he still has a hole in his oesophagus. 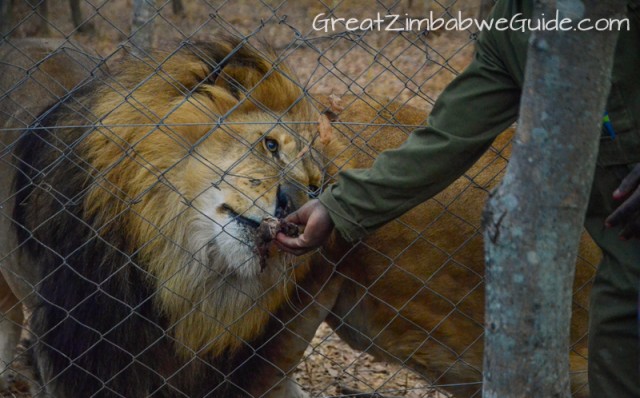 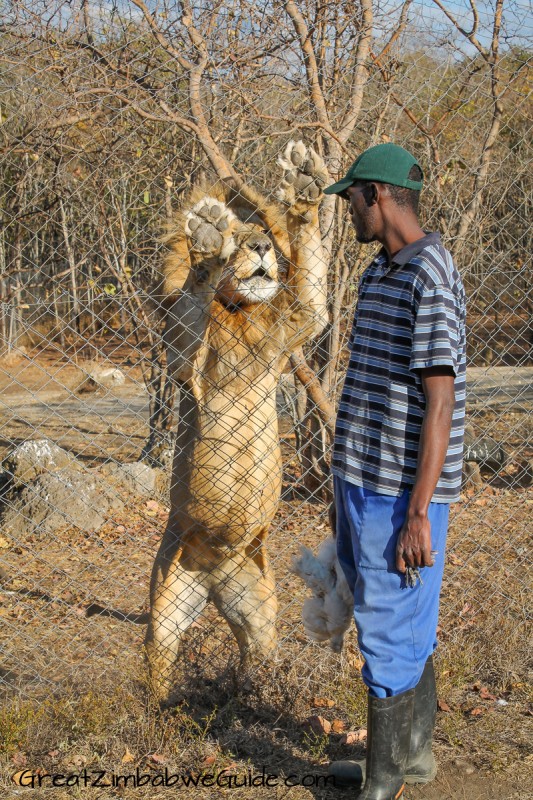 Some of the lions at Bally Vaughan had been rescued from commercial lion farms where they were inbred, which resulted in limb deformity and internal organ malfunctions. At Bally Vaughan, they are loved and well-fed, and love showing off.

I’ll close with an extract from a Bally Vaughan Newsletter, written by Sarah.

“The sheep and donkeys were furious to be excluded from the garden wedding held in the Sanctuary last week. Having enthusiastically assisted with the decoration of the Bridal Arch and re-arranged the seating several times to their satisfaction, they were outraged to be asked to leave before the bride arrived. It took four kilograms of biscuits shovelled constantly into their mouths to keep them from voicing their outrage during the ceremony.”

Part of the Classic Zimbabwe holiday 2013 series. Read the next post where we visit an untamed wilderness: Camping safari in Mana Pools

This is a one-woman band; a passion project. If the information here has helped you, feel free to buy me a coffee using the secure Paypal donation page: