This guest post is written by Calum Douglas, from the UK. He recounts his first impressions of Zimbabwe, where he visited Harare, Lake Kariba and Chinhoyi Caves.

Flight and first day in Harare

I visited Zimbabwe for the first time to attend a friend’s wedding, and was not really looking forward to the flight very much, or the heat, but the thought of going there was too interesting to turn down the opportunity.

I flew from London to Harare via Ethiopia. The airport at Ethiopia was predictably a bit on the rough side with plenty of old hulks at the extremities of the landing strip. There I first noticed some of the many cultural differences that appear in warmer climes, which is that the procedure for boarding planes is controlled by people holding up hand-written signs and pointing. I have no idea how it all worked, but in the end it all seems to just work itself out. This haphazard organization is something we are trained to disapprove of in northern Europe, but which I actually came to enjoy by the end of the trip.

Harare airport was much the same, and despite a smooth descent, the passengers thought it a fitting moment to break out into cheering and clapping upon landing, which was not something I’m used to. On reflection it’s all part of the African way of celebrating every little thing in life, because in Africa for some people it can end much more quickly than in Europe with our safety nets of government and hospitals. So you need to just enjoy things as you go along, which is something I also learned to like a lot.

There were no horror stories passing through customs, and no bribes required! Having been met at the airport by our friends, we travelled by car into the centre of Harare where we could see many locals selling various fruits at the road side. We bought some mangoes after a minor discussion about the price and arrived safely at our friends’ house in the northern suburbs.

The thing that strikes you initially is how alive everything is: the ground, trees and grass is teeming with various pretty and sometimes noisy creatures which all sing together to form a cacophony of life that is an utterly alien sound to northern European ears. After a few days it becomes a pleasant background hum, which I missed a lot after getting back to Heathrow at the end of the trip.

The first evening meal was spent in comfortable warmth, candlelight and eating excellent food. The fruit in particular is so much richer and fuller than European supermarket fruit that it might almost be classified as a different food group. In spite of some somewhat menacing-looking spiders in the house (which turned out to be so docile as to be almost boring after a week), sleep was not too difficult as the time difference between the UK and Zimbabwe is mercifully small for such a long flight.

We then travelled by car to Lake Kariba, which is about 4 hours’ drive. The roads were mostly pretty reasonable and the only delay was stopping to pay “road tax” at a few checkpoints which consisted of a few dollars.

After arriving at the north end of the lake, we transferred to speedboat and motored across the lake which was really a nice way to spend an hour in the sun with a beer. 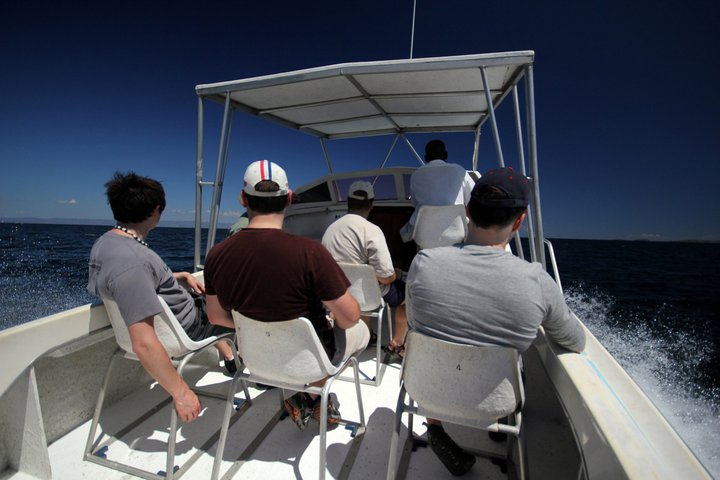 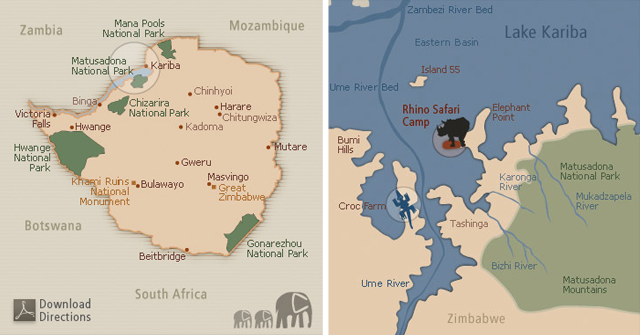 We eventually reached an isolated “island” which is cut off from the mainland when the lake level rises, depending on the dam and rains.

The “island” is home to Rhino Safari Camp, a small but excellent safari lodge, which houses a series of sturdy wooden huts on the shoreline which are elevated about 2 meters above the sand. 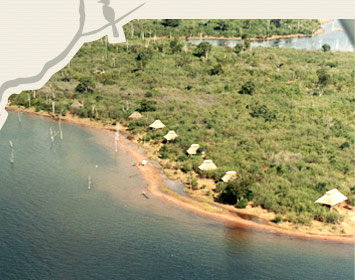 The lodges along the shoreline. Courtesy of Rhino Safari Camp

I could spend a long time going into all the details of what we saw on the safari tours (but that will spoil the surprise when you go), but sitting in a Land Rover about 10 meters from a fully-grown elephant is not a sight to be missed.

In the evenings we had amazing dinners next to a campfire, and ate a range of great food, including some fish we caught in the lake which tasted fantastic. We saw plenty of game, a lot of elephants, hippos and crocodiles! More elusive were hyenas and lions, which we heard in the night… but did not see, despite having an excellent guide. 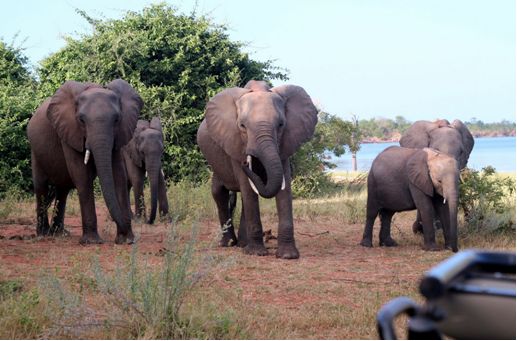 Elephants viewed from the land rover. They got really close to us. Photo courtesy of Fred Larsson 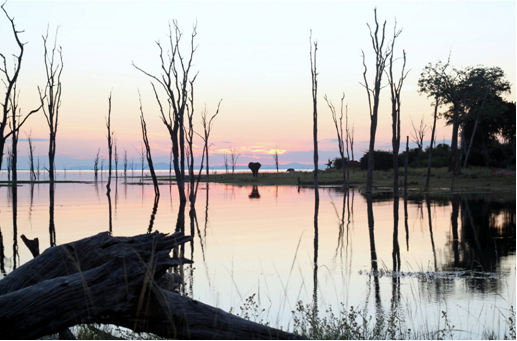 View on the Island one evening, with a large elephant visible right in the middle. Photo courtesy of Fred Larsson

Very memorable was drifting off to sleep safely under mosquito nets, listening to the gentle crunch of hippos chewing grasses just in front of our hut.

For me the highlight of the trip was actually not the game-viewing, but was just a simple thing as having a shower! There is a shower area in each hut at the back, with warm water fed out through an overhead nozzle which is completely exposed to the sky. The feeling of showing under the stars of the African sky above you in the pitch black cannot be matched by any other experience, in my opinion.

Trip back to Harare

On the way back we stopped at Chinhoyi Caves. This is a system of caves filled with incredible clear and blue coloured water, I promise it really looked exactly like the photos. Some people were scuba diving and you can see them even 30 meters away, the water is like crystal.

Overall I had a fantastic time in Zimbabwe and would definitely go back and see it all again and explore more of the country. It was definitely worth the long flight – and the heat wasn’t as bad as I expected!