Doris Lessing, winner of the Nobel Prize for Literature and author of The Grass is Singing, has recently died, and it would be amiss not to mark it here. Lessing was, in my eyes, one of Rhodiesia’s (and now Zimbabwe’s) literary greats.

The Grass is Singing was Lessing’s debut novel, set in 1940s Rhodesia, about a young woman who moves to the bush after marrying a farmer. It is written in the stark, honest and cutting language that I love, and after reading it at university, it quickly went to the top of my Zimbabwean books list. It scared me and welcomed me; it revealed follies and truisms, and its setting of a lonely, heat-oppressed, tin-roofed farmhouse has stayed with me ever since.

Here is an extract:

When she was gone, she thought, this house would be destroyed. It would be killed by the bush, which had always hated it, had always stood around it silently, waiting for the moment when it could advance and cover it, for ever, so that nothing remained. She could see the house, empty, its furnishings rotting. First would come the rats. Already they ran over the rafters at night, their long wiry tails trailing. They would swarm up over the furniture and the walls, gnawing and gutting ’till nothing was left but brick and iron, and the floors were thick with droppings. And then the beetles: great, black, armoured beetles would crawl in from the veld and lodge in the crevices of the brick. Some were there now, twiddling with their feelers, watching with small painted eyes.

And then the rains would break. The sky would lift and clear, and the trees grow lush and distinct, and the air would be shining like water. But at night the rain would drum down on the roof, on and on, endlessly, and the grass would spring up in the space of empty ground about the house, and the bushes would follow, and by the next season creepers would trail over the verandah and pull down the tins of plants, so that they crashed into pullulating masses of wet growth, and geraniums grew side by side with the blackjacks. A branch would nudge through the broken windowpanes, and, slowly, slowly, the shoulders of trees would press against the brick, until at last it leaned and crumbled and fell, a hopeless ruin, with sheets of rusting iron resting on the bushes, and under the tin, toads and long wiry worms like rats’ tails, and fat white worms, like slugs. At last the bush would cover the subsiding mass, and there would be nothing left. 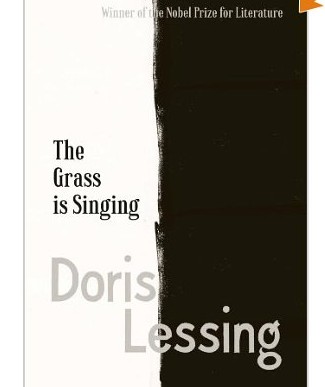 This anecdote from The Guardian leaves me with no doubt that Lessing truly understood what she was writing about:

“What influence does African culture have on your work?” asked a witless member of the audience at the Hay on Wye literary festival some years ago. Lessing blinked at her with undisguised irritation.

Africa, she pointed out, is not like “the Isle of Wight or Long Island”. Its cultures are unquantifiable, its influence on those who grew up there too intrinsic to analyse. “Whatever I am, I have been made so by central Africa,” she wrote in Going Home, her journalistic account of Southern Rhodesia. “The fact is, I don’t live anywhere. I never have since I left that first house.”

See The Grass is Singing on Amazon

This is a one-woman band; a passion project. If the information here has helped you, feel free to buy me a coffee using the secure Paypal donation page: